If Simon’s parent’s prediction from the fortune-teller had come true, he would have ended up a postman.

Instead, he became the director of the Ming Ri Children’s Theatre and Institute for Arts Education in Hong Kong.

Upon meeting Simon at Ming Ri’s modest housing in the northern part of Kowloon (just north of Honk Kong Island) I immediately felt at home.  This is the kind of environment I’m used to.

Desks and storage boxes shoved in a mosaic of ordered chaos, littered with puppets hanging from every protruding pipe and atop the haphazard furniture.  He said “Hello” with disarming swiftness and we carried on talking for the next three hours.  The bulk of which is too much to print here, but I’ll do my best to summarize both his amazing history and what he’s contributing to my research.

Simon began his circuitous theatre career in the 1970s as the assistant manager for the Hong Kong Players Theatre.  At that time, companies were only producing western story imports in rep.  After months of sitting backstage and listening to show after show, the lack of local theatre was too glaring to ignore.  He is a Hong Kong native and he saw the need for homegrown culture to be cultivated, not imported.  So he started a theatre.

His first project, in the 1970s mind you, was called ‘Twisted Condom’ and dealt with the topic of nearly forced abstinence of physically and mentally disabled Chinese.  Controversial, of course, and a total success.  His company carried on for a few years, building a name on their experimentation and fearlessness.  During a company meeting to discuss their next show, someone posed a shockingly simple question: no one in Hong Kong does children’s theatre.  Now wouldn’t that be experimental?

Here they are, 30 some odd years later – the largest children’s theatre in Hong Kong.  Along with their four show season, they run a teacher training certification for utilization of puppets and drama in the classroom. 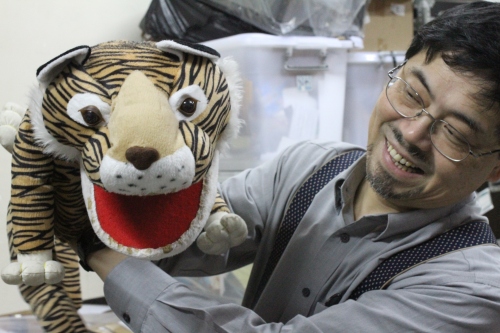 Simon also teaches periodically at the Hong Kong Academy for the performing arts, has studied and worked with theatre artists from nearly every country (I really do mean every), is currently starting a three year long collaboration creating a new piece of children’s theatre with four European countries and four Asian countries, has served as the China UNIMA President for several years and was instrumental in canvassing and cataloguing Chinese puppet troupes around the country for UNIMA in 2000.

This is where I got lucky.

I happened to come to Hong Kong first for the Fulbright midyear conference.  It coincided perfectly with my estimated grant start and so I, unintentionally, met Simon first.  And he is the guy to kick this thing off right.

He has generously provided me with contacts to visit some major shadow puppet collections (many parts not on display to the public), contacts for the government sponsored provincial troupes, and even some master craftsman who are scattered throughout the countryside.

This wealth of knowledge from my very first interview had me worried.  If everyone has this depth of networking and passion – where will the journey end?  I’m allowing that to remain muddy for now and will simply let the puppets lead me.

Thanks for reading friends~

For a more recent article on Simon Wong and Mingri, click here for: In Limbo.
For more info on the company , click these links: (Sorry, it’s in Chinese – but there are pics/vids!)
http://www.mingri.org.hk/
http://www.unima-china.org.hk/newweb/eng/mainframe.htm

For the last 4 months, I have been in a preparation swirl.  As my departure date creeps closer, the swirl becomes tighter and more furious.  It’s not any one thing; it’s everything.  A 10-month research trip, in comparison to my other projects, is eclipsing.

But this is where I often thrive; a convergence of big things that I must wrestle into a comprehendible, edible size.

As much as I plan, I must also remember that this is China.  Nothing is a guarantee and to assume so would be sheer folly.  So how do I frame this year?

By the following two thoughts:

By keeping these priorities in place, I think my work will find continuity.  I am choosing to worry less about the end product and more about the experience of people and places.

The blog will feature Profiles of each of the people I meet.  There will be scholars, puppet masters, singers, musicians, puppet makers, puppet distributors, leather makers, and audience members.  I will also be including my personal discoveries through photo and video.  Writing is not where I traditionally find expression – but I’m going to resist the urge to rely solely on visual material and put my thoughts to paper when I am able.

I can’t think of anything I’d rather be doing.

THE ORIGIN OF SHADOWS

Shadow Puppetry was created in China over two thousand years ago during the Han Dynasty.  The origination legend tells of an Emperor who has just lost his Empress and subsequently his will to rule.   As the Emperor’s wisest advisor pondered the best way to revive the Emperor’s spirits, he came upon children playing in the courtyard with parasols under the midday sun.  Their simple parasols cast shadows that came to life before his very eyes.  That night, the Advisor invited the Emperor to the courtyard for a special performance; there he conjured the likeness of the late Empress with such mastery that the Emperor was revived and went on to rule for many prosperous years.

Despite its high profile origins, shadow puppetry quickly became a people’s art form; it’s simplicity, portability and nighttime performances were perfectly suited for the working classes.  Farmers and laborers took up puppeteering, singing, musical instruments and storytelling after the sun went down to create a tradition that became the heart of their communities.   All night performances were held for any and all occasions; birthdays, weddings, house raisings, and funerals.  For the past two thousand years, the art form survived everything from war and famine, to regime changes and the Cultural Revolution.

Sadly, only now in the 21st century, shadow puppetry in China is on a steep and fast decline. This ancient art form has steadily been losing the battle with television, video games and other forms of entertainment in China’s swiftly modernizing republic. Audiences and apprentices are evaporating at an alarming rate.

Shadow puppetry in China is still hanging on through government funded “preservation” efforts, museums, academia and tourism. During my journey, I hope to make contact with puppet masters, scholars, enthusiasts to hear what they have to say about its past, present and future.  Of course, I’ll be posting what I find here…for you.