As a theatre artist who researches, I see no better way to put my discoveries and theories into practice than through performance.   Setting up a project centered around my year of research before I had even left for China last year may seem presumptuous, but luckily I presumed right.  It is my next best step.

I’ve thought about my little shadow show continuously for the past two years.  The seed of it has been there for much longer.   Carrying a living idea around in your pocket is such a good way to enrich the fieldwork experience.  Those chaotic and quiet moments were calmed or enthused by reorienting my research around this little idea.

And, as much as I probably could have used a break this spring, there is no better way to start this process of unraveling the experience – no matter how messy or impossible it may seem.  And it certainly is unraveling.

With a story outline in hand, my trusty collaborators and I dove into our first session of intensive rehearsals a few weeks ago with the objective of simply tearing the story apart and putting it back together again.  What started out as a simple story of a shadow puppeteering Grandfather’s journey through 1930’s China up until present day has become a much richer, much more dimensional story in just two weeks.   We’ve intentionally left it an adolescent 3rd draft in order to give us more room to play when the puppets have arrived.

For these three weeks, I’m in the studio day and night finalizing designs, cutting puppets, assembling lights, ordering projector bulbs, assembling the shadow puppet screen, painting, scenery building (etc, etc) to begin visually assembling the show.   This is the part I’m used to and comfortable exploring inside of.  I could sit in the dark making things dance with light all the day/night long. 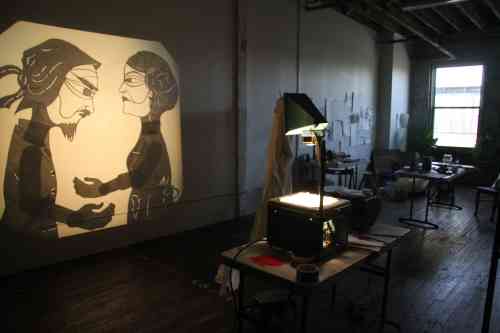 Testing shadows in larger scale on the overhead projector.

I was a bit nervous setting up my first cutting studio in the US.  After my 2008 apprenticeship, I tried to cut a few times at home only to realize that I hadn’t learned enough.  I was so frustrated in the first 2 attempts that I gave up indefinitely.  My intention during my Fulbright apprenticeship was to get to a place where I could continue studying completely on my own, and – big sigh of relief – I think I’m there.

My modest puppet cutting station.  It’s usually a lot cleaner than that (sort of).  Oh and I’m not drinking Mountain Dew – that’s my Chinese-style sharpening stone water container with a hole punched in the cap.

While I still have years to go before I’ll get anywhere close to mastery, my hand-cutting puppet skills have already improved in the two weeks I’ve been cutting daily.  I’m realizing just how different the cowhides are (handmade, machine made, top-cut, second layer, color, finish) and how they determine the moisture content before you cut.  And the blades, the blades! My first attempt to sharpen my knives at home proved to be, yet again, hair-greying.  I had brought home two coarse sharpening blocks that were so soft, they ground down with each stroke, leaving me a concave groove in exactly the wrong place.  I felt doomed.  I fretted and bought every sharpening stone in Home Depot only to find they all had the same problem. Finally, after I told myself to give it a rest for a day or two – I stumbled upon the one red block I’d purchased in Xi’an somewhere.  I tried it and exploded with a trail of happy expletives. 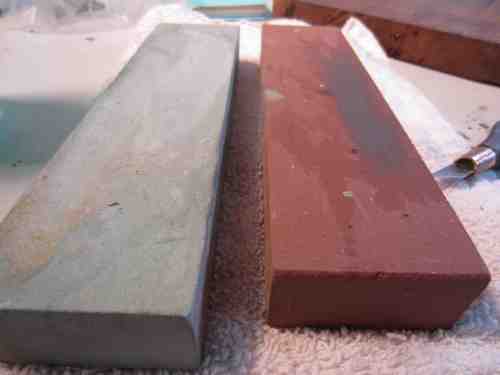 This was the stone!  I could sharpen on it without sharpening it into a sandy mess.  And with it, I’ve been slowly honing my hand-sharpening nuance.

We’ve still got along way to go: another intensive rehearsal period of integrating text with the visual world and then another break to finish up things on the production side.  Performance dates/venues are still in flux, but the show will be performed sometime in May/June in Minneapolis.  Of course, I’ll post about it here.

Some of the puppets in progress~

Note: while the my designs draw heavily from contemporary Cultural Revolution puppet design from China, they are all original.

Just a note about funding for the arts: I’m quite sure Minnesota’s arts funding opportunities is much of what makes our arts community (and henceforth our city) so vibrant, interesting and diverse.  This project has been funded by an Artists Initiative grant from the Minnesota State Arts Board, a Next Step Grant from the Minnesota Regional Arts Council and a Puffin Foundation Grant.