Pardon my relative silence on this blog, but these last couple months have been a swirl of personal and professional goings on.  The catalyst of this particular swirl is my big move northward to Montreal.  The very thought of relocating oneself geographically has always triggered in me a deeper examination of the now, a reminder to take stock in absolutely everything.

I’ve moved away from my beloved hometown for love and study.  In the fall, I’ll begin an interdisciplinary PhD in the Humanities at Concordia University in Montreal.  The thesis proposed is continued research and apprenticeship with the traditional Chinese shadow puppet makers remaining in hopes or validating their work in a broader context of China, folk arts and inherited practices as well as working towards a best practices for a living archive of their process.  It’s a five-year program.  You’re probably thinking I’m bonkers right about now.  You’re probably right.

But, these giant leaps of faith towards love and passion become a necessity instead of a choice at some point in one’s life.

So, off I went – northward into the land of maple syrup and socialized medicine.

As a little treat to myself, knowing I would be leaving so soon, I spent my last few months in Minnesota following up on a trail of Chinese shadow puppets right in my beloved hometown of Minneapolis.  Partially, to satisfy my curiosity and partially to establish a relationship should I ever be in need of a collection to study.

I contacted the new curator of Asian art, Yang Liu, at the Minneapolis Institute of Art awhile back letting him know I was the local Chinese shadow puppet hunter and I’d heard a few old rumors that the MIA might be in possession of some.  He said he wasn’t sure, but would I like to come chat with him?  Of course I would.

Yang’s office is tucked into a cozy corner of the MIA’s back offices.  His office is small, neatly kept and predictably stuffed with Asian art books.  Yang is a warm and attentive art enthusiast with nothing but helpful ideas and generosity to share with a young puppet hunter.  Within an hour of sharing stories, we confirmed that there were some puppets in their vaults and I was welcome to come take a look.

I returned on an otherwise depressing day of April snowstorms and was whisked straight away to the collections’ holding room by Ken Krenz who somehow manages to keep track of the museums countless objects.  Just being in the back halls of the museum had me breathless.  Without hesitation, he brought out a small package of shadow puppet heads wrapped in tissue paper. 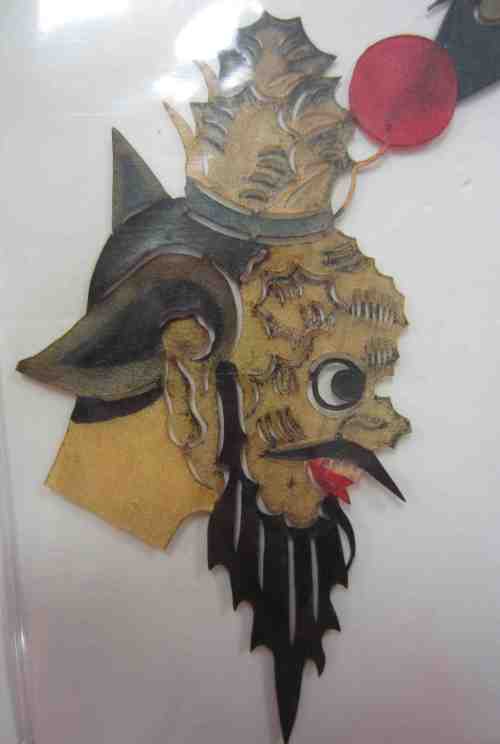 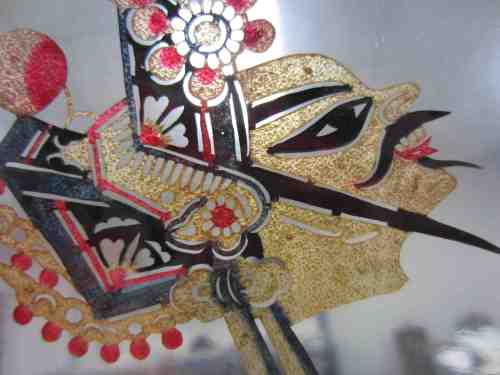 The imbedded hair follicle pattern in this leather tells you it’s most likely Donkey hide.

The collection is miniature in comparison to some I’ve seen; a hundred or so shadow puppet heads from the Northeast region of China.  They’re most likely from the 1900s, perhaps even from after the Revolution.  But, still.  They’re always beautiful, always educational, always motivating.  I poured through them carefully, taking more nuanced notes and feeling giddy at their touch.  I also marveled at the difference in my work and level of connoisseurship compared to even six months ago.  I knew what I was looking for, what notes to take and what to snap photos of.

Because the museum has known so little about these objects, not even sure if they were Chinese in origin, I’ve offered my services in exchange for a relationship with them.  I’ll come back and check on them every now and then and offer additional information when it arises.  There is something comforting about having a place to return to and a collection to familiarize myself with in the place I have always considered my home.  If nothing else, it’s helping to preserve the things I love in the places I love.

Someday, Minneapolis, I hope I can share these and so many others with you.  You’d love ‘um.